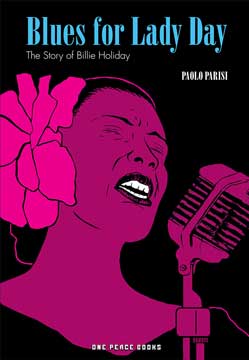 Blues for Lady Day: The Story of Billie Holiday

Billie Holiday, one of the greatest jazz singers of all time, had a troubled life: a childhood in poverty, brothels, jail, broken love, and a dependence on alcohol and heroin. Her first performances in the night clubs of prohibitionist America was where her pioneering vocal style was born—later to become a lasting influence on jazz, pop, and modern music to this day.
Performing with jazz legends such as Lester Young, Louis Armstrong, Count Basie, and Artie Shaw, she became a true American icon. This graphic novel, told through short biographical fragments, is the story of Lady Day.

Paolo Parisi is a professional graphic designer, illustrator, and artist who regularly collaborates with major Italian publishers. He has worked with companies in countries all over the globe, including England, France, Japan, Denmark, Brazil, and the United States. His latest graphic novels are Coltrane and Blues for Lady Day. He has also collaborated with London-based music label Soul Jazz Records. Paolo currently lives in Rome, Italy.